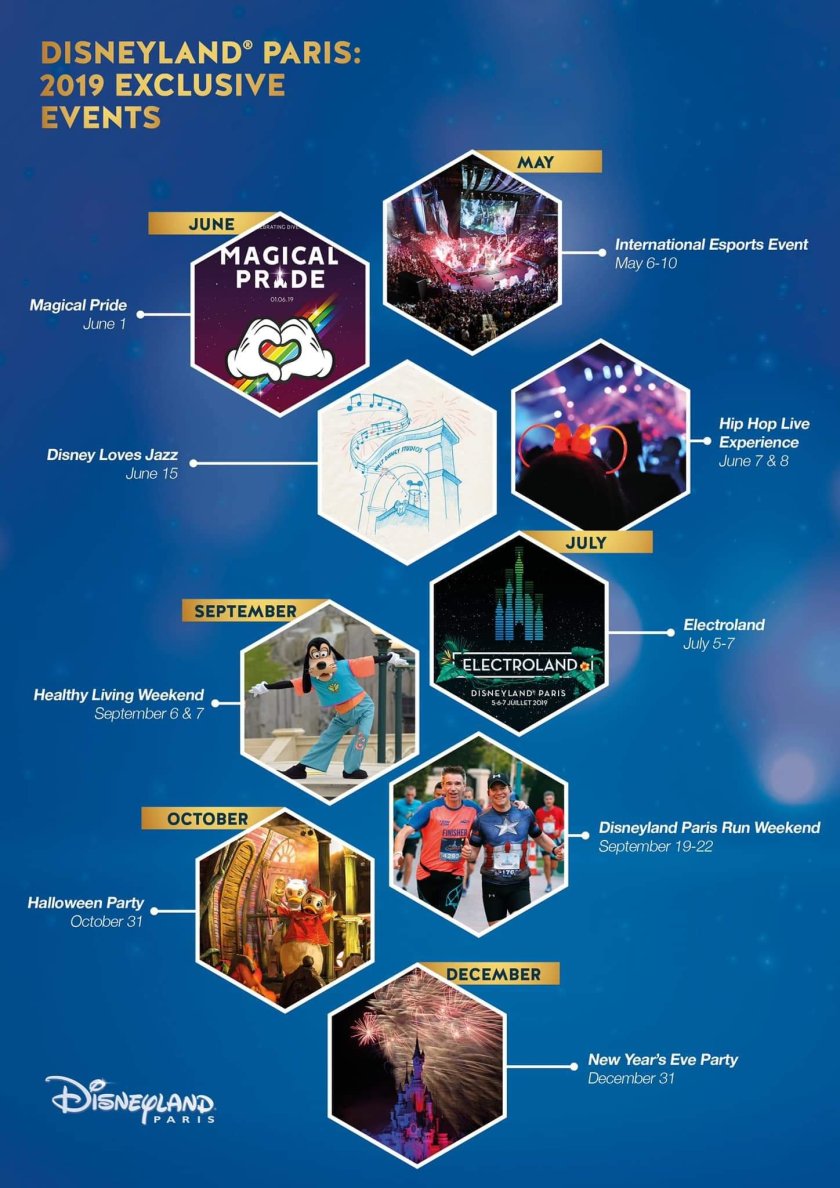 Disneyland Paris guests have lots of exclusive events to look forward to this year at Disney’s Paris theme park.

Spanning music, sports and entertainment, there’s a special live event for everyone all year round.

These exclusive events – lasting from one to four days – will offer everyone unique and unexpected experiences, always with Disneyland Paris’ distinctive touch in terms of show and entertainment.

A festive spring at Disneyland Paris

A summer of music at Disneyland Paris

June and July will be getting into tune for three exclusive events celebrating music in all its forms.

On 7-8 June 2019, Disneyland Paris Hip Hop Live Experience will celebrate urban culture in the heart of Walt Disney Studios Park with each night a unique live concert featuring France’s greatest hip hop artists, workshops, artistic performances and a few surprises. This event will top off with a parade of its own, plus access to Disney Characters and attractions.

On Saturday, 15 June 2019, Disney Loves Jazz returns to Walt Disney Studios Park to assert once again the strong links uniting the world of Disney with jazz.

From 8 p.m. to 2 a.m, the evening will feature internationally-renowned artists who will perform great Disney classics on the big stage of Moteurs… Actions! Stunt Show Spectacular.
Guests will also enjoy private access to attractions and Disney Characters.

On July 5-7, guests will enter the jungle for the third annual Electroland music festival that will celebrate a mix of music and magic over three incredible nights at Walt Disney Studios Park. This year’s edition promises world-famous DJs hosting unforgettable shows on an open-air stage with spectacular projections on Hollywood Tower Hotel – and of course, access to guest-favorite attractions!

On 6 and 7 September 2019, guests will experience a weekend of health, happiness and yoga in the magical setting of Walt Disney Studios Park for the first Disneyland Paris Wellness Weekend.

On 19-22 September 2019, the fourth edition of Disneyland Paris Run Weekend will give running enthusiasts, both young and old, the opportunity to explore Disney Parks together with Disney Characters in unforgettable races in a unique setting.

Guests can visit DisneylandParis.com to grab their event tickets and stay tuned for even more unforgettable events.

The company said uncertainty over Brexit and rises in fuel and carbon costs led it to go into administration.

If your flight to Disneyland Paris was booked with Flybmi the Civil Aviation Authority has published the following advice to UK consumers.

If you booked directly with British Midland Regional (FlyBMI) and paid by credit card you may be protected under Section 75 of the Consumer Credit Act 1974 and should contact your card issuer for further information. Similarly, if you paid by debit or charge card you should contact your card issuer for advice as you may be able to make a claim under their charge back rules.

Direct booking with an airline

Booked through an Airline Ticket Agent

If you booked your ticket through an airline ticket agent you should speak to the agent in the first instance; they may have provided travel insurance that includes Scheduled Airline Failure cover.

Some airlines and airline ticket agents will offer customers either a specific Scheduled Airline Failure Insurance (SAFI) policy or include similar protection within a broader travel insurance product. The type of protection provided may vary depending on the type of policy taken out. A policy may simply cover the cost of the original tickets purchased or any unused portion, or the additional cost of purchasing new flights, such as new tickets for travel back to the UK.

If you have booked flights or a trip that includes flights with a travel firm that holds an ATOL (Air Travel Organiser’s Licence) and received confirmation that you are ATOL protected, the travel firm is responsible for your flight arrangements and must either make alternative flights available for you so that your trip can continue or provide a full refund. If you are abroad, it should make arrangements to bring you home at the end of your trip. Contact the ATOL travel firm for more information.

The British Government has launched a ‘Prepare for EU Exit‘ website which has compiled all the Governments Brexit advice all in one place.

This new website gives advice on how to prepare and the steps you may need to take once the United Kingdom leaves the European Union on 29 March 2019.

If your traveling to Disneyland Paris after Brexit the following links will be of interest:

Disneyland Paris has today released tickets and packages for their Disney Loves Jazz party being held at the Walt Disney Studios Park on 15 June 2019, from 8pm to 2am.

Swing to the rhythm of jazz music through Walt Disney Studios Park and share unique moments with the jazziest Disney Characters.

And that’s not all… attractions will be open all night!

• Admission to the privatized event at the Walt Disney Studios Park on June 15th 2019, from 8pm to 2am with several open attractions and eating places (with supplement)

A limited number of tickets without a hotel package will be available for sale during the first quarter of 2019.

Free for children under 3 years.

To access the evening festivities, aspecial bracelet will be given to valid ticket-holders upon arrival, starting at 8pm.

The evening festivities may be changed, postponed or cancelled without prior notice, particularly in the event of inclement weather.

Disneyland Paris announce today (5 February 2019) that the repairs to the exterior of the Twilight Zone, Tower of Terror at the Walt Disney Studios Park are nearing completion.

The Scaffolding removal will commence on 18 March 2019 at the end of Star Wars: Legends of the Force season. This will be in order to not disrupt the projections for the Night Time Spectacular – Star Wars : A Galactic Celebration.

The removal of the scaffolding will continue into April & May 2019 with estimated full restoration of the attraction to be completed at the end of this process.

These dates are of course subject to change.