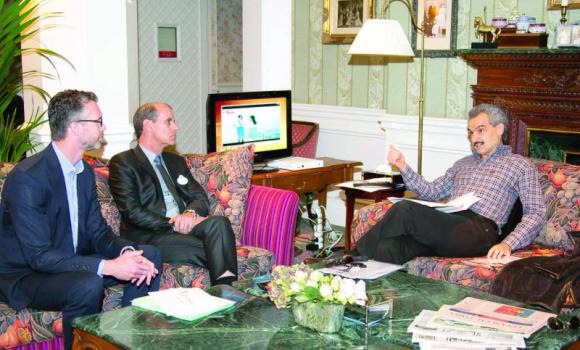 Prince Alwaleed and Tom Wolber, president of Euro Disney, during the meeting in Paris.

During the meeting, the two sides discussed the latest developments in both KHC and Euro Disney in which KHC holds a 10 percent stake.
Moreover, Prince Alwaleed and Wolber also discussed a number of general local, regional issues and the current global economic climate.

They also discussed Prince Alwaleed’s investments in Euro Disney and France, and the social and economic bi-lateral relations between their respective countries.

In August 2014, French President François Hollande and Prince Alwaleed held a meeting at the French presidential Palace, The Elysee.

During the meeting, Hollande and Prince Alwaleed discussed political, economic and cultural matters.

This is Money has published the following article confirming that Saudi Prince Alwaleed is to join The Walt Disney Company recapitalisation of Euro Disney S.C.A.

Disneyland Paris, which draws more than two million British visitors a year, secured a rescue deal from its biggest shareholder, the Walt Disney Company, last week that will see new shares issued and some of its crippling debt written off.

Alwaleed is already a 10 per cent shareholder, but has until now remained silent on whether he would continue to back the French operation.
The Walt Disney rescue could have seen his stake cut dramatically unless he invested extra cash himself. His expression of support is seen as a crucial vote of confidence in the ailing French venture.

In an exclusive interview with The Mail on Sunday, Alwaleed, who famously sued Forbes magazine for suggesting in its world’s billionaires list that he was worth only $20billion, said: ‘We will fully subscribe to the rights issue because we support France and we support Disney.

‘They will not take our stake. We will maintain 10 per cent,’ he said.
Alwaleed said he had decided to invest in the rescue after spending a day at the Disneyland Paris resort on Tuesday and speaking to Walt Disney’s chief executive Bob Iger.

‘Operationally there is no problem at all. I went to the hotels, the park, everything. Meticulous. It is a top-notch tourist destination.’

Disneyland Paris is Europe’s most popular tourist attraction. Last year it had 14.9million visitors, more than the Eiffel Tower and Louvre combined.

Alwaleed said: ‘Two years ago we had 16million visitors to Euro Disney, with half from France. Now it is down to 14 million and most of the loss comes from France. But we are seeing a plateau because revenue was up this quarter.’

British visitors have been critical to keeping the resort open. They are the second most frequent visitors after the French, accounting for 15 per cent in 2013.

All share-holders will be able to take part in the rights offer but Disney has said it will buy the shares of investors who do not participate.

Disneyland Paris opened in 1992 and racked up a net loss of £598million in a year. It has only turned a profit in eight of the past 22 years and last year lost £61.5million.

Disney will swap €600million of Euro Disney’s debt for equity and will defer repayments on its own loans to Euro Disney until 2024 as well as issuing new shares.

Source: This is Money 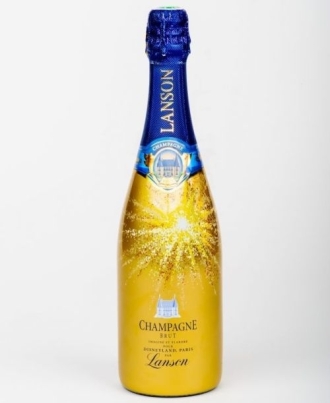 Disneyland Paris  is partnering with one of the most illustrious champagne brands in France – Lanson to launch a special vintage.

The Cuvée Spéciale Disneyland Paris has been created to celebrate the  opening of Ratatouille: The Adventure – L’Aventure Totalement Toquée de Rémy, and  you  will be able to find this special vintage in the boutiques and resturants in the resort priced at €65.

The champagne is said to call to mind the personality of Rémy, the little rat known for his refined palate. This champagne makes a strong impression: Pinot Noir grapes lend powerful fruity notes and roundness, while Chardonnay grapes add suavity and elegance.

Here is the official overview of the proposal being presented by Euro Disney S.C.A and TWDC to it’s shareholders.

Overview of the Proposal

Euro Disney S.C.A. announces a proposal for a €1 billion recapitalization
Overall rationale
The proposal is designed to improve the financial position of Euro Disney and enable it to continue investing in the guest experience.

Context of the operation
Challenging economic conditions in Europe coupled with Euro Disney’s debt burden have negatively impacted its financial performance.  Due to these factors, Euro Disney has been constrained in its ability to make investments in Disneyland Paris

Details of the proposal

Objectives of the proposal

Euro Disney S.C.A.’s Supervisory Board has expressed unanimous support for this proposal.

Indicative Timing of the operation and milestones
After the information and consultation of the Workers’ Council and the Shareholders’ approval during the general meeting of ED S.C.A.’s shareholders early 2015, the transactions contemplated by the proposal are expected to be completed in the first semester of calendar 2015.

What are the details of the proposal?
The proposal is a 1 billion euro recapitalization of the Euro Disney group backed by The Walt Disney Company (“Disney”) and designed to put the company on better financial footing; it will improve cash balances and reduce debt. This proposal, if implemented would:

Why are you doing this?
Despite continued investment in the resort, Euro Disney has been negatively impacted primarily by the challenging economic conditions in Europe. Euro Disney needs to improve its cash balances and reduce its debt to continue to invest in the guest experience. This proposal achieves these goals.

Do I have something to do now with respect to this proposal?
No. No immediate actions are required from you for now as the transaction is expected to take place first half of calendar year 2015. It’s important to understand all your options and take the time to review them.

What are the benefits of the transaction for shareholders?
The proposal will improve the financial position of Euro Disney and enable it to continue investing in the destination. This improved financial footing can only benefit the Euro Disney shareholders.

My shares were worth 3.46 euros before the announcement, will my holding lose value?
The proposal allows shareholders to preserve economic value of their holding
The example below demonstrates how to preserve your economic value but is one of many options you have as a shareholder. You have time to review all your investment options as the transaction will occur in the first half of 2015.
If you want to guarantee the full value of shares at their pre-announcement share price, you would participate fully in the rights offering and then sell all your shares into the mandatory tender offer.

You have the flexibility to pursue a range of options—among them, to fully realize the value of your shares at their pre-announcement share price; to maintain your ownership percentage; or to make no new investment, realize any value from selling your subscription rights, and hold or sell your shares.

What are the next steps for implementation of the proposal?
Next steps for the proposal include, first the workers’ council’s information and consultation period initiated today, then approval of the shareholders (at a general meeting expected in early 2015) and the delivery of a comfort letter by an independent expert regarding the preliminary opinion on the fairness of the mandatory tender offer price in November. The transaction is expected to take place first half of calendar year 2015.

Members of the Euro Disney S.C.A. Shareholders Club received the following communication from the company this morning regarding todays announcement of the recapitalization project.

The Shareholders Club informs you:

Letter to the Members of the Shareholders Club

The contemplated transaction encompasses several components. First, there would be an injection of approximately 420 million euros via capital increases in Euro Disney S.C.A and its principal subsidiary. Second, there would be a significant reduction of the Group’s indebtedness through the conversion of 600 million euros of the debt owed to TWDC into equity of Euro Disney S.C.A. and its principal subsidiary. Lastly, there would be an improvement of the Group’s liquidity via the deferral of amortization of loans until final repayment in 2024.

You would also have the option to sell your shares to TWDC after the completion of the capital increases of Euro Disney S .C.A. through a mandatory tender offer required by French law and regulations. The proposal is made by TWDC on the basis of a mandatory tender price of 1.25 euro per share.

A more detailed description of the Disney proposal and the conditions which must be met for it to be implemented can be found under “Details of the Proposal” of the press release.

If implemented, this operation would mark an important financial milestone for Euro Disney. This new financial foundation would enable us to pursue our investment strategy and better position the Resort for a potential return to growth in Europe.

As newly appointed Président of Euro Disney S.A.S., I am delighted to return to Disneyland® Paris after having been part of the Resort’s Grand Opening team in 1992 to lead the group in the implementation of its long-term development strategy. The management team and I are very excited about this transaction, and we sincerely hope you will continue to take an active role in this new era for Disneyland Paris.

Disneyland Paris executives will be holding a special meeting with the parks Workers’ Council on Monday to discuss the resorts finances, informed sources have reported.

The meeting will begin before the Paris stock exchange opens, which three sources have confirmed separately today. The meeting will focus on the company’s cash flow and the arrival of Euro Disney’s new CEO Tom Wolber in September.

The company, when contacted by the press has refused comment but the sources said they had received formal communication regarding the meeting.